It was the devastating question from Jeremy Paxman that finished Chloe Smith’s career as economic secretary to the Treasury. She’s now an under secretary at the Northern Ireland Office (or as it’s known at Whitehall, The Wilderness). Paxman was so exasperated by Chloe Smith’s inability to explain a Government U-turn on fuel duty that he eventually resorted to one of the oldest tricks in the book. He lobbed a controversial word at her, in the hope that she’d repeat it in her denial. Such as “Incompetent? No, I’ve never been thought of as incompetent. I don’t think I’m incompetent.” The audience wouldn’t take in her denial. They’d hear and remember only one word – incompetent. Interviewers do it all the time, and interviewees fall into the trap time and again. Andrew Neil to Jeremy Corbyn “Your party’s totally divided on this issue isn’t it?” Corbyn: “No. We’re not a divided party. There is no division in our party over this.”  Compare this with Conservative leading light Ruth Davidson – a former BBC producer. Interviewer: “Your party is completely divided over this issue of giving the Scottish Parliament more tax raising powers.” Davidson “ No, I welcome debate on this issue. That’s why I’ve set up this commission to feed into it…” In two sentences she’s done four things. First, avoided repeating the negative word. Two, turned the negative into a positive (for Division, say Debate). Three, put her personal stamp on the answer (‘I’ rather than ‘we’) And four, use active terminology (“I’ve set up this commission” rather than “There is a commission which will”). Of course, all of this is easy with hindsight. There are journalists who’ve completely re-written Chloe Smith’s interview giving her the answers she should have said. If only she’d gone through them in a media training session beforehand! But even then it’s tricky to deal with Paxman’s most wounding question, towards the end of the car crash interview: Paxman: “Is this some kind of joke?” 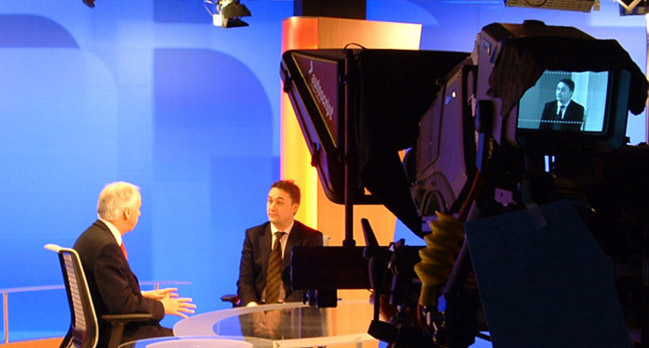